← Meet Karrie and Maryann Meet Renee, a cowgirl at heart → 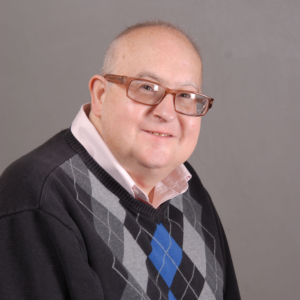 For those who are in need of minimal assistance, semi-independent living is provided in a Mainstay home or apartment. This service provides adults with the support of a devoted staff member who visits as needed, but allows for residents to maintain their freedom. Just ask David, who will never lose his sense of adventure.

David came to Mainstay over 20 years ago and has an entire lifetime of escapades he’ll gladly share with you if you simply ask. From his trip to California where he went whale watching, to his journey to Israel where he rode a camel, this Washington, PA native seems to have a limitless list of feats to divulge.

As the middle child between two brothers, David always had a friend and partner in crime nearby. When his youngest brother Dan came into the world, David didn’t mind sharing a room with his older brother Stephen.

Although his brothers now live farther away, David has never let the distance get in the way of their special bond. When his niece was becoming a bat mitzvah, David surprised her and Dan by making a trip to New York. When he arrived, they decided it was the perfect time for David to also celebrate his own adult bar mitzvah. Mazel Tov!

When David made a trip down to Texas, Stephen shared with him quite an uncommon hobby: storm chasing. They were so far from home by the time night fell that they had to spend the night in a hotel. While storm chasing can sometimes be dangerous and would frighten most people, David enjoyed every second of it.

Since his retirement from Amerifit in 2015, David enjoys visiting the movie theater to catch the most recent film and cooking his favorite meal, steak and broccoli. About 13 years ago, David discovered his talent for painting and drawing, having inherited natural artistic aptitude from his mother. David attends a weekly art class at Mainstay and his paintings can be seen on Mainstay’s web site, note cards and calendars.